This post is one I originally wrote for the Spring 2021 issue of the Wake Genealogy Watch newsletter. - Cyndi Deal

It would be remiss to ignore Wake County and its place in history of both state and nation as well as its importance to the many first settlers of the region. In researching the creation of Wake, I was most intrigued to find its creation firmly entangled with the fiery politics of the day.

Did you know that Wake owes its founding directly to the turmoil caused by the Regulator Movement of the pre-Revolution period from 1765 - 1771?

Life, survival, and politics was rough for the inland North Carolina colonists of this period. A drought and crop losses created a serious economic depression. They were forced to buy food and supplies from eastern merchants who were charging top prices for their wares and were quick to press charges when the colonist were not able to pay. The merchants and the judges, lawyers, and sheriffs charged with collecting these debts had no ties or allegiances to these struggling souls, only to the British sovereign who had no concerns but to collect all that was owed and collect quickly.

By 1765, King George III had promoted General William Tryon as governor. Tryon pressed the tax collectors, sheriffs, judges and increasingly, the military to ruthlessly pursue the collection of all debts. Tryon and the King’s agents were hampered by the fact that these farmers were in backcountry woodlands that were not easy to access, govern or maintain control. In addition to the perceived lawless stubborn nature of the colonist, there also a notable amount of corruption within the ranks of the merchants and the King’s agents.

Stress grew into hostility and protests. Tension in Hillsborough, the closest town for the colonist to press their grievances and seek legal redress, became volatile and reached a crescendo in September 1770 with an uprising that rocked the town and was forever after labeled the War of Regulation.

The ensuing violence prompted the colonial General Assembly to explore ways to dampen the violence and regain control over the rebellious and unruly colonists.  One consideration was  a plan to carve up the large counties in the middle of the colony which proved the most difficult to govern.  This map from 1768 shows the expansive regions with limited access to government and legal services. 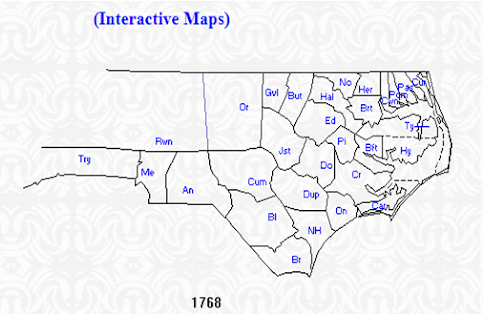 In December  1770, a bill to create a county carved out of portions of Orange, Johnston and Cumberland was presented to the House of Commons by Joel Lane, then a Johnston County Representative. The bill was enacted on March 12, 1771, and the new county was named to honor Royal Governor Tryon’s wife, Margaret Wake Tryon. The Assembly carved out three more inland counties after the formation of Wake. Those were Chatham, Guilford and Surry. The second map shows the new counties and resulting changes. 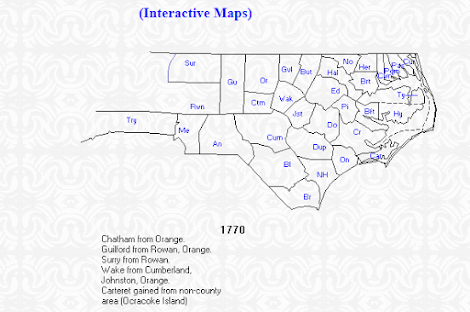 This effort to quell resentment and rebellion did not succeed. It surely sowed the seeds of the Revolutionary War in the very near future.  Wake County owes it very existence to this tumultuous time in American history.

What Was the Regulator Movement? History and Significance, by Robert Longley. Thoughtco.com

Historical Raleigh, With Sketches of Wake County (from 1771) and Its Important Towns; Descriptive, Biographical, Educational, Industrial, Religious, by Moses Neal Amis. C. 1913. Available for free reading on Google Books. The text of the “Act for the Erection of Wake County and St. Margaret’s Parish”, the order directing Wake’s registration, and a list of the 19 townships and the prominent and influential citizens of the time are included in this book. Very much worth the read!