I got really curious about the California Restaurant from a published Thanksgiving menu that I had written about previously. I have looked high and low for that menu so I could share it here, but no luck. I will share it if I find it. If you find it first, help a girl out, please? 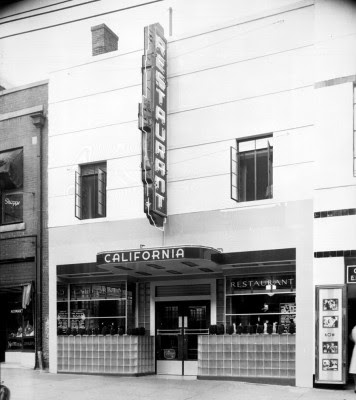 I did some research and reading about the California.  I found some really interesting facts about it, especially the evolution from fruit store to restaurant then to clothing store. It was featured in a write up on the Goodnight Raleigh blog back about 2012. 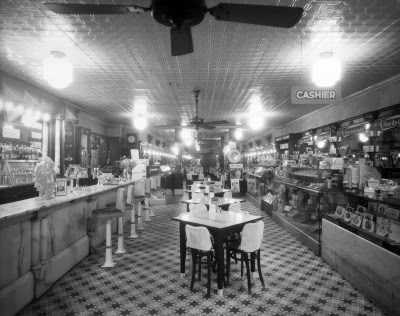 The history of the California is really fascinating, especially if you have these surnames in your tree:
Vernakes, Stathacos, Adler.

You can view this great story here.

Posted by Cyndi Deal at 5:32 AM No comments:

We had a great turnout and a powerhouse DNA topic! Thanks, Jean. 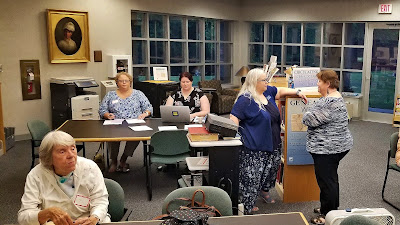 The full handout will be published at the WCGS website shortly. Our webmaster is traveling.  In the meantime the links here will get you started.

This includes the slides from the presentation. It will walk you thru the process.
Check here: Summer of DNA (2019) Handouts


Return to the WakeCoGen Website
Posted by Cyndi Deal at 11:54 AM No comments:

Email ThisBlogThis!Share to TwitterShare to FacebookShare to Pinterest
Labels: Autosomal DNA, Handouts, Notes, Summer of DNA, tools, WATO, What are the Odds

It was replaced by the more modern version at 4016 Carya Dr in Raleigh in the mid 60's. Now, as the current facility awaits its own impending update, we can look back to enjoy this beautiful library building and its interesting local history. Many lovely relics of the original, including the tops of the Italianate columns, exist inside the entryway of current building. I sincerely hope that all these mementos of Raleigh past will be preserved in the coming makeover.

Visit Good Night Raleigh for the back story and some wonderful old photos of the original ORL that stood at the corner of Hillsborough and Salisbury Streets.

Posted by Cyndi Deal at 5:55 AM No comments:

We all know it today as Logan's Nursery, but in its heyday, Seaboard Air Line Railroad Depot was a bustling place. It was our gateway to points north and the sunny south.

Whether you passed through its walls to board a train, or had an ancestor who worked there at its height of popularity, you will enjoy these links that feed our "nostalgic for rail travel" moment.

Posted by Cyndi Deal at 5:39 AM No comments:

Have you used the FamilySearch.org wiki for Wake county in your research. It is a great place to check for resource locations and contact points.  You will find info on church, land, military and probate records, as well as maps and county history and border changes. Check it out. There is a wealth of information there. It is a good place to start if you are just beginning your Wake County research. 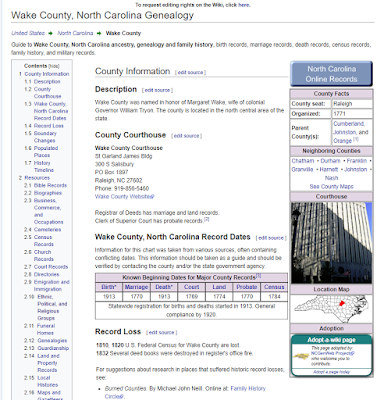 Visit the wiki and be sure to scroll all the way down the page or you might miss something!

Posted by Cyndi Deal at 5:18 AM No comments:

In my effort to cover the topic in the time allowed, I was using a very simplified data set that was edited (think one of those home shows) for time.

If you are trying to create your own spreadsheet from memory of my steps, take heart, Dana Leeds will walk you thru in her blog posts (Links in the handout and here).

I wish you much fun and success. As always start small and give yourself permission to start over when you start to get the hang of it.


PS - Also, keep watching the Summer of DNA link at the top of the blog home page. All handouts and links will be posted there for reference.

Return to the WakeCoGen Website
Posted by Cyndi Deal at 11:50 AM No comments:

Wake Wednesday - Declaration of Independence - First Reading in Raleigh - What was it like then?

An article from the N&O has haunted me for years. It was about the first reading of the Declaration of Independence in Wake County and what that must have been like.

I saved it. Can't find it now, but every summer at this time I think of it and how it captured my historic fancy those several years ago. So much so, that my young family including my two sons, husband and my father and step-mother made the trek downtown that hot, hot July 4 to tour the Joel Lane house and stand at the Boylan Bridge spot and imagine (despite construction detritus all around) what it must have felt like and sounded on that hill at the first reading in August of 1776.

Well, it haunted me enough to go searching for the article again. After several failed attempts - success!

I must give mad props and a plug to the NC Government and Heritage Library for their library card and the online access it provides. From their site, with my library card to log in, I was able to search the N&O Archives to find the article and I am so pleased. Now it is safely saved to my hard drive so I can pull it out each year and imagine being "in the room where it happened..."

You will need a subscription or a G&H library card to log in and read the article, but it is so worth it. No telling what else you might find with your card access.

This is my favorite passage from the article and the bit that propelled us down to that historic corner on a hot July afternoon:


In a chapter on the American Revolution, (Charles) Heck recorded that a colony-wide Council of Safety met at Halifax, N.C., on Aug. 1, 1776, and legislated that the citizenry would be "fully informed" about the Declaration of Independence.

He proceeded with "historic license:"

"[W]e have a right to conclude that [Colonel Joel] Lane was the 'Commissioner' or head of the Wake County Committee of Safety and was naturally the man who called the citizens available together before the little courthouse steps and read them as ordered on August 1st, 1776, or thereabouts, the Declaration of Independence."

"How the sacredness of this hillside just north of Boylan Bridge [the present southwest corner of South Boylan Avenue and West Hargett streets] has so little been appreciated, the writer cannot understand. There, facing upward toward the crest of the hill where Joel Lane's new house stood, the words as Joel Lane, the political leader of the county, sounded them out in the experienced tone of a speaker, the people heard and the words reflected the words that spelled freedom and a new life to these pioneers and the echo must have resounded back over the fields and trees that covered the land where the city of freedom, so soon was to be born and where years of earnest effort were to make it become the embodiment of all that declaration stood for."

If you venture down to this historic "sacred hillside," I bet you will here the ghosts of freedom too.


Return to the WakeCoGen Website
Posted by Cyndi Deal at 5:29 AM No comments:

If you are a member of the James Olive family association and planned to attend the reunion last year only to be foiled by a hurricane, here is your chance to regroup and regather.

Here is an excerpt of the Olive Branches newsletter with a brief description:

If you need more information, you can check their Facebook group or send me a message I have pdf files of the newsletter and the pre-registration sheet.