Happy Wake Wednesday! As someone whose ancestors have been in Wake County since before the Revolution, I’m always curious about people and places who played a part in their lives.

I’ve long been fascinated with the New Light area of Wake County. It is in the far northern tip of the county and is very near Falls Lake. I’ve been particularly interested in how New Light got its name, and ran across this on NCPedia:
"New Lights" refers to a specific sect of Baptists that emerged during the Great Awakening of the 1730s and the Second Great Awakening of the early 1800s. During these revivals, some converted Baptists were named "New Lights" because they believed that God had brought new light into their lives through their emotional conversion experiences. These New Light Baptists were also known as Separate Baptists for their belief in conversions, which set them apart from other Baptists, who preached Calvinistic ideas of predestination. (Attributed to Ellen Fitzgibbons Causey, 2006).

Would love to chat with other researchers who found a connection between “New Lights” who settled in New Light! Post here!

Right in the heart of downtown Raleigh, where NC State students drink lattes and shop in boutiques, once sat a very different world: An antebellum plantation, complete with a classical mansion straight out of Gone with the Wind, and the sad Southern history of enslaved men and women.

The name of the plantation owner will sound familiar to many locals: Judge Duncan Cameron. The Cameron family owned much of the land in that section of Raleigh, encompassing modern locations such as Cameron Village shopping center and the Cameron Park neighborhood."

Read more of the story from Candid Slice.

Thanks, Heather and Candid Slice for bringing us the details of the Duncan, Cameron, Benehan families and their land.


Return to the WakeCoGen Website
Posted by Cyndi Deal at 5:05 AM No comments:

Road Names in Wake County.
"...there is a lot of history behind the designations." says the N&O. 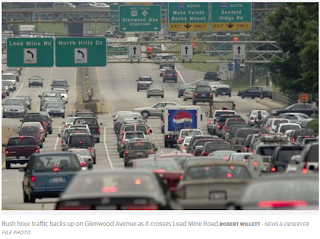 Read more from N&O here.
Posted by Cyndi Deal at 5:58 AM No comments:

On Nov. 19. 1806, Hartwell Parrish, John S. Robeteau, Dury Brown, Isham Utley and William Spright, Jr conducted business at the William Hill General Merchandising Store. This account appears in an abstraction of the original ledger in the Wake Treasures Journal. This abstraction of the ledger Contains 250 pages, approximately 2500 names, and activities from November 1806 to March of 1807. The abstraction is divided into three parts appearing in Vol. 1, Issues 2, 3, and 4.

If you had Wake County ancestors living in the area in the early 1800's, this may be a record set you want to check out.

Journal access is a great perk of your Wake County Genealogical Society membership and a handy tool for those researching in Wake County remotely. Members have 24/7 access to the Journal. With 20 plus years of content, you will likely find the surnames and place names you are researching. Access the Journal issues directly in the Member Area after log-in.

This content is referenced with permission of Journal editor.
Posted by Cyndi Deal at 5:30 AM No comments: